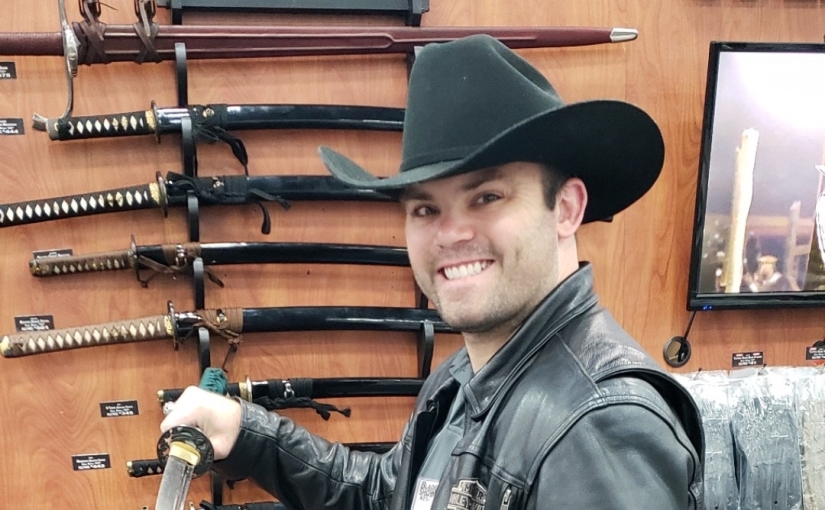 Let’s travel back in time to the Muromachi Period in Japan (approximately 1392-1573 AD). The samurai of ancient and feudal Japan used curved, svelte, single edged swords called katana on the battlefield and in martial arts. Katanas were carried around upside-down with the cutting edge facing upward for quicker draw. The first to draw and slice the opponent was typically the victor. Wakizashi (smaller swords) or tanto (dagger) were often paired with the katana. The signature of the maker on the blade (mei) were meant to be worn facing outward. The samurai carried the katana and wakizashi pair called “daisho” as an illustration of honor and social rank.

The katana is typically 24 inches or more in length, 1.2 kg in mass, and has a long grip for two-handed wielding. The hand guard, called the “tsuba,” separates the handle portion from the blade portion of the sword. Katana are traditionally made from Japanese steel called “tamahagane.” Tamahagane steel is made by smelting (heating) iron steel on charcoal at low temperatures. The katana contains layers of different carbon concentration: a softer core steel of lower carbon content called “shingane,” and a hard exterior jacket of higher carbon content called “kawagane.” This construction gave the katana a strong and flexible architecture, and very sharp edges. During the purification process, steels are folded, welded, and hammered to create a unified material. Once purified, the steel is drawn out into a billet and hammered to become longer.

The sword doesn’t get its notorious curve until the hardening/quenching process. Differences in the densities of the steels microstructures cause the blade to bend during the hardening process. The edges of the katana receive a thinner coat and the spine receives a thick coat of special clay slurry. Black rice straw ashes are used as a coating to retain carbon content. The blade is heated, then quenched using water. The distinct design along the sides of the blade called the “hamon” are made using clay; every sword makers hamon is a distinguishing artistic mark unlike any other. Polishing stones are used to make the hamon stand out against the rest of the blade. For the blade to perform at its full potential, it must be sharpened using a whetstone process I describe in a previous blog post.

To test katana sharpness and strength, Samurai would slice condemned criminals or those who insulted their honor in half. Bushido was the code of honor and self-sacrifice for Samurai. Adherence to Bushido was dynamic; some truthfully followed it and some merely acknowledged the principles. In addition to having a katana, wakizashi, and tanto, Samurai regularly practiced archery.

How do I get a katana? Authentic Japanese katana can cost thousands of USD! John and I were intrigued by the Cold Steel katanas at last years Blade Show. Although they are not custom made in Japan, their feel and functionality makes for an affordable alternative. They are made out of 1095 spring steel or 1095/1060 folded damascus. This Cold Steel video provides demonstrations of the Emperor series tanto, wakizashi, and katana. Disclaimer: Don’t try this at home.

If you enjoy blade artistry and Japanese katana, please say hello and leave a comment below!

In addition to pursuing my cellular and molecular biology research and medical professional careers, I am a knife artistry dealer. My husband and I started Big John Blades in 2018 with a mission in mind: Everyone needs a sophisticated cutting edge. I think that everyone deserves the best quality knives; I’m here to deliver the education and product. I’m a believer that quality and price are highly correlated. As a custom knife collector with a scientific mind, I continually research the market and invest in high quality knife-making materials. I'm here to listen to the customers expectations and help them create their custom knife. Whether you are an outdoor enthusiast, survivalist, hunter, adventurer, camper, hiker, or connoisseur, an exceptional knife is an asset to any collection. Retail stores can't offer the unique artistry and quality a custom blade will. Custom knives hold their value and in certain instances, increase in value over the years. They are distinguished pieces of art passed down through the generations. View all posts by Kammi Dingman

One thought on “Wanna Katana?”

This site uses Akismet to reduce spam. Learn how your comment data is processed.